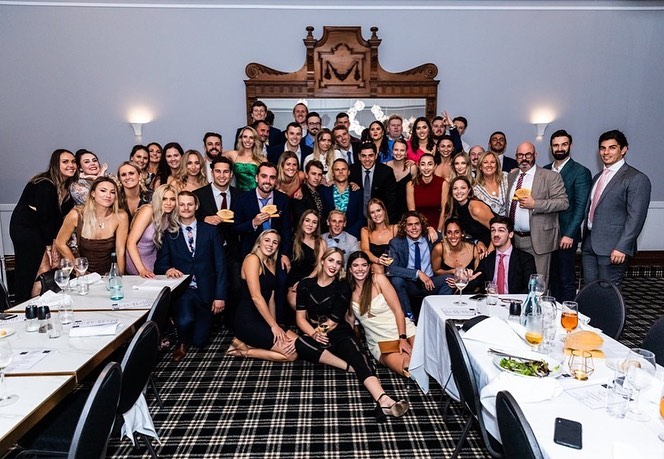 Australia’s largest body-surfing club based in Sydney ‘s Cronulla beach, on 27th of October, celebrated the Club’s third year since establishment. The event annually held at Sydney’s exclusive Tatersalls Club, once again brought the body-surfing community together, in spectacular fashion.

The event not only celebrated the Club’s internal members and their achievements , but also body-surfing sport and the community as a whole.

More than 40 members of the club attended along with guest star appearances from the long term club supporter and the founder of the WAW Hand-planes Rikki Gilby and photographer Mark Hunter a.k.a Bondihunter, famous for capturing mind blowing body-surfing action shots during the Epic Oma Cyclone.

The nigh was opened by Vice President’s (Luke Brbot) address, followed by President’s (Mat Schweighoffer) speech, which outlined all the outstanding individual and team achievements over the past year. Special mentions went to Corey Sains who got awarded with Body-surfer of the Year and Keel Club Person of the year for making it to the semi-finals of 2019 Hawaii Pipeline Contest, 4th Place at the Flat Rock Invitational, Whomp Off Australia 2019 Premier and his continues promotion of body-surfing and the Bate Bay club world wide.

Molly Quinn took the reward for the Whompette of The Year, for her consistent appearances in the meets up through out the cold winter months while Patrick Wild, after being nominated for every award, deservingly took home the Club Person of the Year Award.

Bate Bay Body Bashers was established in 2016, by a group of extraordinary young water-men who very same year went on to bring the title home from the largest body-surfing team event in the world, The Whomp Off Australia. Since than, following their example the Cronulla body-surfing scene flourished. Today, iconic Sydney’s south beach is home to a more than 5 clubs pursing the art of riding the waves using nothing but their own bodies. Yet, Bate Bay Body Bashers’ celebrations in its scale, extraordinary organisation and elaborate and spectacular entertainment remains one of its kind in the body-surfing world.