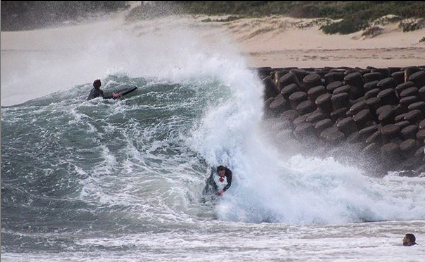 Every body surfer dreams of visiting Newport’s notorious break known as ‘Wedge’. The wave was described in the movie ‘Come Hell or High Water’ as the weird wave attracting very weird people.

Newport’s Wedge might be the most popular break of its type, but a similar wave can be found on the front door of many Sydney body surfers, and they might not even know about it.

Today we caught up with Matt O’Donnell (Owey), the captain of Cronulla’s body-surfing team ‘The Budgy Boys’ and co-founder of the world’s most listened body surfing podcast, ironically named, The Body Surfing Podcast.

Owey, is known for his constant search of different waves and careful analysis of the swell and tide charts. You will rarely catch Owey in the same spot twice, in the morning before work, he will show up at Maroubra, and will spend the reminder of his day at work considering his post work body-surfing option in Cronulla. Shark Island, Point, Suck Rock … Owey will almost always find the best wave.

It is this kind of dedication and love for body-surfing that has enabled Owey, to catch a rare phenomena, occurring maybe twice a year, a large Sydney wedge.

Still hyped from his recent encounter with this infrequent Sydney beast, Owey explained:

“Most if not all bodysurfers dream of catching that perfect reform of the one and only Newport Beach break wall. That dream is a little hard to achieve when you live on the east coast of Australia, unless you are prepared to hunt. In reality no wave is the same, but the key is to do the best of what we have got here“

On 23rd of August, large 10ft + swell and heavy wind’s descended on the east coast of Australia. Most of the traditional spots were either maxing out or were deemed un-surfable and while most body-surfers would have chosen the comfort of home on the cold winter day, Owey was carefully analyzing the charts, knowing that a particular harbor sandwich will love every bit of a stormy 10+ ft swell, making for a very ‘thick and juicy afternoon tea’.

“Truth be told, I was still on the clock when I first drove past, so I quickly went to the office, finished work and pulled the wetsuit on. By the time I dropped back, the swell had maybe dropped a foot or so, but there was still plenty of fun to be had. In the water, the majority of the crowd consisted of body boarders, yet, unsurprisingly the vibes were high in an ‘every man for himself’ affair.“

We asked Owey how he felt in the water, as body-surfing a wedge is no task for the faint hearted.

“I wasn’t scared of the wave, but terrified of the injury. Body surfing a slab thicker than it is tall, in only 1 ft of water will do that to you. My mantra in general is, the second you stop having fun it’s time to stop and that being said I believe that no photo is worth loosing your livelihood over!! HA HA well, in saying that, here is the photo of me doing exactly that.

Finally we asked Owey, if he could describe what the ride was like.

“The wave it self was a blur. The wind was so strong, you had to really dig in to gain speed. In saying that, this was definitely the fastest I have moved in the water. I had only one good look as to where I was going (hell) and that’s exactly where I ended up.”

Almost as if he was riding the wave again, now a little bit relived and in a lighter tone he continued

“I lost a flipper, a hand plane and my dignity, but it was all worth it (laugh). To all those animals that charged larger waves on the day – think of your children! Much Respect. I must say thanks to Robbie Meldrum for the in surf banter and Seb Perhauz for the picture“